From Convexity to Sensoriality

“The expressiveness of lines as mere lines is offered as proof that aesthetic value belongs to sense qualities in and of themselves (…) lines express that ways in which things act upon one another and upon us; the ways in which, when objects act together, they reinforce and interfere. (…) The properties of objects that lines define and of movements they relate are too deeply embedded. These properties are resonances of a multitude of experiences in which, in our concern with objects, we are not even aware of lines as such”.

Creative minds in India have been constantly connected with life and the complexity of the human existential condition, described by sorrows and joys, words and thoughts, moral, intellectual and ordinary occupations. Since antiquity, the sensorial being has been the cornerstone of the entire Indian art tradition. Artists searched for forms and images to disclose the enigma of human sensorial perception. Simple primal forms were at the service of the purpose resulting in abstractness, archaism and plasticity. The well known sense of suavity belonging to the great tradition of Indian secular art, dating back to the reign of Asoka from 270 to 232 B.C., comes from the morphological properties of objects as connected to the sensorial qualities they embody and convey. The surfaces of things, cross-referring to Dewey’s analysis of the experience of the work of art, incorporate the most profound insight into a unified experience of the object.

The roundness and convexity of sculptured shapes, as one of the main characteristics of Indian secular art, are required exactly to breathe a sense of life into spectators. Different realms of thoughts, emotions and actions are summarized within the roundness of surfaces. The bundle of “aggregates” (skandhas) – forms of matters; apperception or sensory awareness, by sight, sound, smell, touch, taste and mental objects; perception of an external environment; volition or will; the basis of emotions; and consciousness – which describe the idea of life as understood by Buddhist philosophy, are all included in the complexity of the sensorial message conveyed by forms. Inflated forms cross-refer to multi-sensorial qualities of human being. Indeed, convexly curved shapes are associable with the existence of content, hidden behind surfaces. They call to mind a sense of concreteness and reality that a concave form very seldom transmits. The existence of content presumes the presence of life, which is not fixed, but a process of being or becoming.

As we can learn from Philip Rawson’s comprehensive analysis of Indian secular art, such convexity was obtained by means of simple methods of sculpture, by rhythmic punctuation and flat chisels which resulted in a sequence of facets allocated on the same continuous lines lacking break points. Contours of different units of forms were connected within a single contour by producing as few breaks as possible. For instance, clothes were represented and are clearly noticeable only when they do not touch the body. To obtain a single contour and the continuity of lines, Indian sculptors favoured the method of strip-cutting. This involves cutting off the stone in a series of facets, each of which runs like a continuous band, from top to bottom of the figure, and corresponds to one outline of the silhouette. Then, single units of forms (arms, legs, etc.) are never recognizable in their own identity; rather they exist in the completeness of the whole structure. Even hollows appear as meeting places of convexities, or better linear channels rather than true concavities. In addition, the use of curved loops, such as bracelets and necklaces, helps to enhance the idea of closed volumes: convex holders of reality.

All methods of sculpture applied by Indian sculptors were addressed to the emphasis of the roundness and even the thickness of volumes inviting spectators to experience and look at objects from the inside rather than from the outside. The inner meaningful structure manipulated and conveyed by methods of sculpture and techniques at the same time strictly rational and purely expressive, is the real raw material of Indian secular art. The geometry of convexities and the mathematics of pointed lines running around the rounded volumes are shaped to produce impressive sensorial objects.

As outstandingly expressed by Rawson, Indian ancient sculptors created a total art experience by which the spectator is invited to identify himself with the perceived image. Indian secular art created a humanistic language still today capable of emphasizing in what ways the experience of an object, architecture or work of art are a manifestation and a celebration of the life of a civilization, by promoting its development. 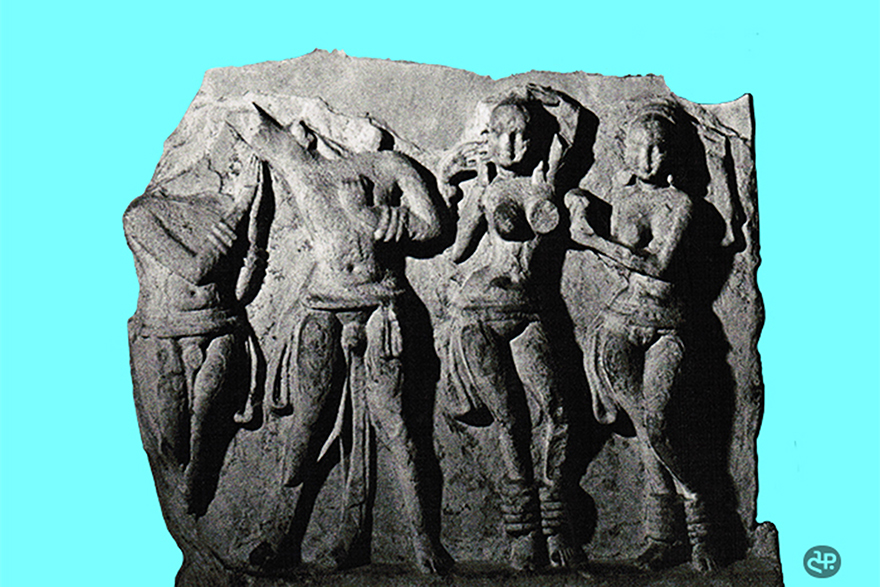 “Art, as I have described it (analysing Indian secular sculpture), is compounded out of a wealth of direct, remembered experience, and involves the whole man, not merely his disciplined brain. Indian sculpture is meant to move us to the aesthetic ecstasy which India’s great aestheticians dignified with recognition as enlightenment. Let us never forget that the only road to that ecstasy is the dedicated absorption of all the suggestions, visual, sensuous, tactile and kinetic, that each work of art has to offer us”.